It’s a given that coming from being a hard-core atheist, I would have a lot to learn about the world’s seven great religions. It’s not to say that atheists don’t know about these things, but it’s unlikely that most have gone into any great depth of study. I don’t like to speak in terms of absolutes, so allow me to add the disclaimer that there are always exceptions to the rule.

Along my journey out of the abyss of atheism, I recently attended a gathering of about 20 men and women from employees from local Raleigh towing companies to bio engineers for a Buddhist Healing Practice. Never having had an experience of this nature, I was curious, but nothing more. Ailments from the physical to the mental were addressed and the only requirement on my part in attending was to keep an open mind.

What I couldn’t repress was my cynicism, that is to say; if one does not come out cured, is that person to blame? Was it a set-up to go in with expectations of a spiritual experience and come out feeling less than or shamed? Was there going to be an underlying agenda that the idea of superiority over disease only existed if you are meditating “right”, eating “right” or doing other required practices “right” that would allow for a healing to take place? To me these expectations are possibly more harmful than a disease itself.

After a short period of introducing ourselves in a casual setting we all sat comfortably on pillows on the floor in a large circle. We were guided into silence and a soft, palatable energy came over the room. We sat in silence for about fifteen minutes – which for me, flew by in what felt more like five. I noticed that others were as drawn in as myself as the atmosphere took on a feeling of safety and ease.

The group dynamic was one of shared respect. The words spoken didn’t impart this sense as much as an unspoken mutual agreement. It seemed as if we united in the allowing of whatever happened was all in Divine right order. Expectations took a back seat to the come what may attitude apparently held by many of the participants. This acceptance set a tone as a forerunner for anything to unfold.

I came to understand that from the Buddhist point of view the mind and the soul are the same thing. The mind is pure, without prejudice, limitless, gender-less, non-judgmental, formless, with the ability of all-knowing. Its basic nature is God’s essence. The mind occupies a human body with the job to keep us aligned with our over-all well being, but can also be inadvertently supportive of our sickness and unease when asked to do so.

From the Buddhist perspective good health as well as ill-health are created in the mind. The belief is that disease is internal and not external. Even falling off a bike and breaking an arm was originally conjured up in the mind to lead us to our ultimate evolvement as spiritual beings. Nonetheless, sickness is an obstruction and not an integral part of the mind. Bad health is viewed as a temporary condition. Because it is not aligned with the mind’s pure nature, it can be discarded. To observe the mind in action gives ownership to direct and conduct our choices.

Karma
During my short period of time exposed to the teachings of Buddha and suffering, I realized the belief is that the whole journey of suffering is based on our Karma. Simply put; Karma is you get what you give. This is a condensed version, indeed. If we are harboring a disease it’s because of negative actions or thoughts that we also have harbored – past or present. 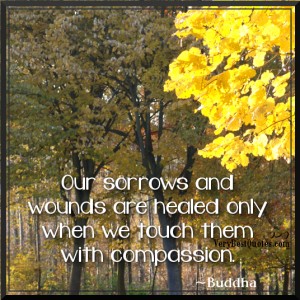 They can be against ourselves or others, negative begets negative. It’s a given that coming into the earthly realm, the mind will be confronted with different circumstances that easily throw us into negative mindsets. As we evolve, we neutralize the negativity and let it flow through us, or bounce off of us, or we deftly dodge it all together. According to the Buddhist, the wheel of Karma spins for thousands of lifetimes until we are able to finally disengage and return back to the Source of the mind’s purity.

It was an eye opening couple of hours. I’m not a sworn in Buddhist at this point, but I admit that learning others’ approach and their idea of God and disease has begun to intrigue me more. Brushing the surface of this age old belief system humbled me in a way. There is so much more to us humans than I can begin to imagine, so I’m learning to hang on and let go as the wheel of Karma cycles and spins me through whatever comes my way.